What is the Energy Security Board and why is it important? 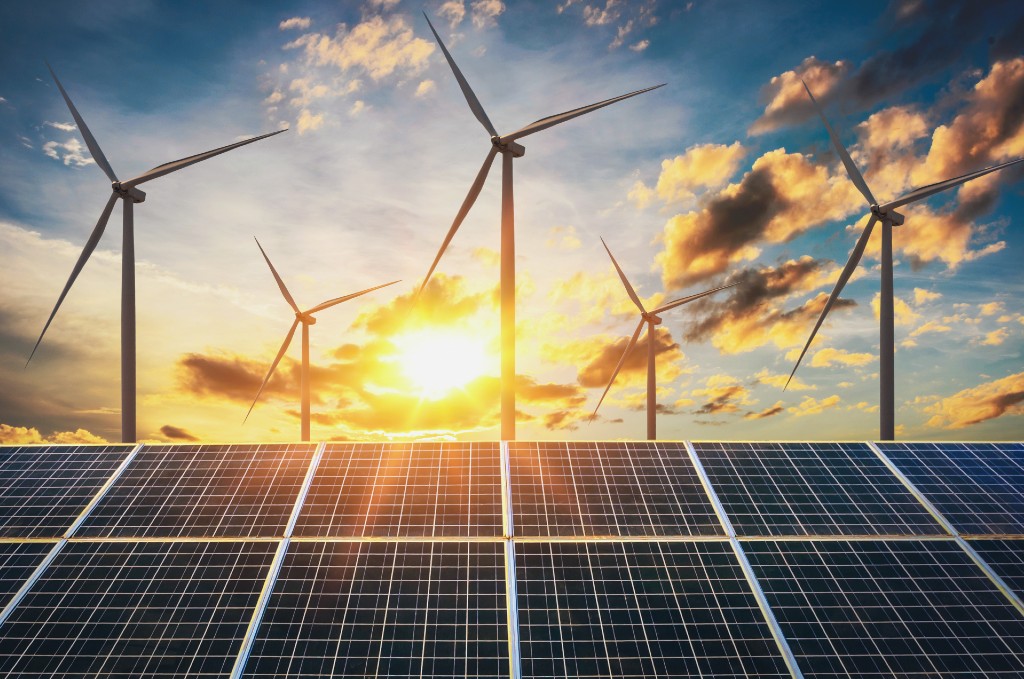 Australia’s energy system is in transition, and a crucial turning point has been reached. For now, at least, it’s the role of the Energy Security Board to ensure a secure and reliable energy future in the midst of that transition.

The National Electricity Market (NEM) is transforming rapidly from one dominated by large thermal generators to one that’s reliant on low-carbon energy production such as wind and solar generation.

On the face of it, it’s a good thing for sustainable and relatively cheap fuel sources to make up an increasingly large proportion of our energy supply. But there are significant challenges that come with this change, including sharp fluctuations in supply and demand as a result of weather-dependent energy generation and a lack of the inertia provided by traditional generators to support grid stability.

Successfully managing this transition requires a vision for the future and significant system oversight – and that’s where the Energy Security Board (ESB) comes in.

Tasked with providing system oversight for energy security and reliability, the ESB was initially established to coordinate the implementation of the recommendations in 2017’s Independent Review into the Future Security of the National Electricity Market.

Produced by Dr Alan Finkel AO, who was the Chief Scientist of Australia at the time, the review included a ‘Blueprint for the Future’ that laid out a plan for the NEM in the face of rapid technological change. The Blueprint listed four key outcomes:

These outcomes were to be enabled by three key pillars:

The review noted that security and reliability in the NEM had been compromised by the poor integration of variable renewable electricity generators, including wind and solar, coinciding with the unplanned withdrawal of older coal and gas-fired generators.

Dr Finkel recommended that all new generators connecting to the NEM should be obliged to meet technical requirements to contribute to fast frequency response and system strength, including a minimum level of inertia in each region. Dr Finkel’s review also noted that system security and reliability would benefit from the continued operation of existing thermal generators.

Dr Finkel called for the formation of the ESB to drive the implementation of his blueprint on behalf of what was then known as the Council of Australian Governments (COAG) Energy Council. 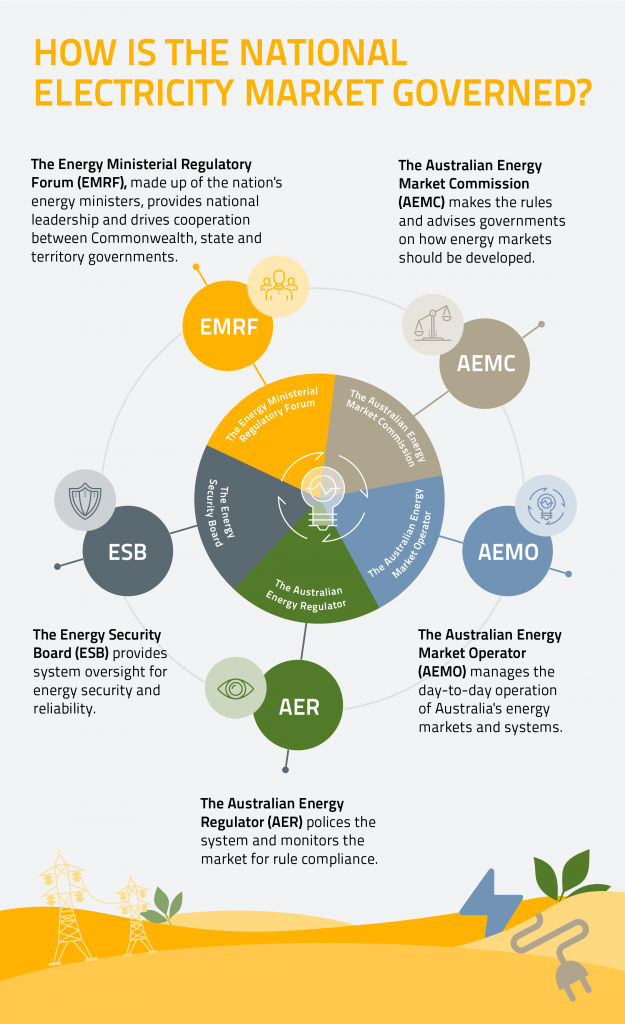 In July 2017, the Energy Council agreed to establish the ESB in line with Finkel’s recommendations, with an Independent Chair and Deputy Chair appointed by the Council. As well as overseeing the implementation of the Finkel Review recommendations, the ESB was charged with delivering an annual Health of the National Electricity Market report to the Council that would track the performance of the system, the risks it faced, and the opportunities for improvement.

After three years, an independent review of the Board would be undertaken and delivered to the Council – although, by the time the report was delivered in 2020, the Council no longer existed.

The work of the ESB is not yet done, and there is significant unfinished business in the arena of energy market governance.

That’s why, in March 2019, the COAG Energy Council requested the ESB to advise on a long-term, fit-for-purpose market design for the NEM that could apply from 2025 onwards.

The ESB will advise on changes to the existing market design, or recommend an alternative market design altogether, to ensure a secure, reliable and low-emissions electricity system at the lowest cost to consumers as ageing thermal generators are retired and replaced with a varied mix of renewable energy sources.

Meanwhile, the independent review of the ESB was conducted as planned in 2020. Because the Prime Minister had announced that COAG Energy Council would cease in May, and the details of how the new Energy National Cabinet Reform Committee would operate were still under development at the time of the review, the recommendations were simply directed towards ‘Energy Ministers’ and ‘Energy Senior Officials’.

After consultations with those energy ministers, members of the ESB, industry bodies and market participants, the review concluded that the ESB has completed a “significant body of work in overseeing the implementation of the Finkel recommendations in a comparatively short time frame with a modest set of resources”.

The review also determined that the ESB has been “extremely well-led and played a valuable role in driving delivery of those recommendations; and that it has helped coordinate a range of complex market and policy changes associated with a rapidly transforming energy market”.

However, the review also noted that a number of participants complained that it’s difficult to get a comprehensive view of the ESB’s work, and recommended that the ESB should improve its reporting transparency and communications and engagement activities.

Ultimately, the review recommended that the ESB should remain in place until the end of December 2021, in order to deliver the post-2025 energy market design requested by energy ministers, and to give those ministers time to consider and agree to the ESB’s proposals.

The energy ministers agreed to extend the operations of the ESB to December 2021. Angus Taylor, Federal Minister for Energy and Emissions Reduction, said the Government has “a clear priority to deliver reliable, secure and affordable power” and “it is important the ESB continues its work on the post-2025 market design to ensure system strength now and into the future”.

In January 2021, the ESB delivered its latest Health of the National Electricity Market report, which found that real progress has been made with improved generation capacity, emission reduction, competition and network investment – but system stability and security remains critical.

The ESB’s Independent Chair, Dr Kerry Schott AO, said the speed of change in the NEM continues to present problems.

“We are concerned about security constraints in some parts of the NEM and the increasing pressure on distribution networks from growing rooftop solar penetration,” she said.

“This, combined with growing large scale renewable generation and low wholesale prices, means it is vital that post-2025 reforms are put in place that can work alongside government policy schemes.

“We’re moving in the right direction, but major changes are needed to unlock value to customers and ensure capital investments are made in an efficient and timely manner to deliver the affordable, reliable and secure electricity consumers need.”

The ESB’s Health of the NEM report found that emissions in the NEM are 25 per cent below 2005 levels, and are expected to be 50 per cent down by 2030, as a result of the shift towards solar, wind and battery-stored energy and away from coal and gas. However, the report also stated that security of electricity supply “remains the most concerning issue” for the NEM.

“To manage security issues, AEMO (Australian Energy Market Operator) has had to intervene in the market far more than in earlier years.”

The report noted that the AEMO had to issue more than 250 directions in 2019-20, compared to 158 the previous year. A direction is when power generators are asked by the AEMO to increase or decrease their output to assure electricity supply in response to security or reliability concerns. 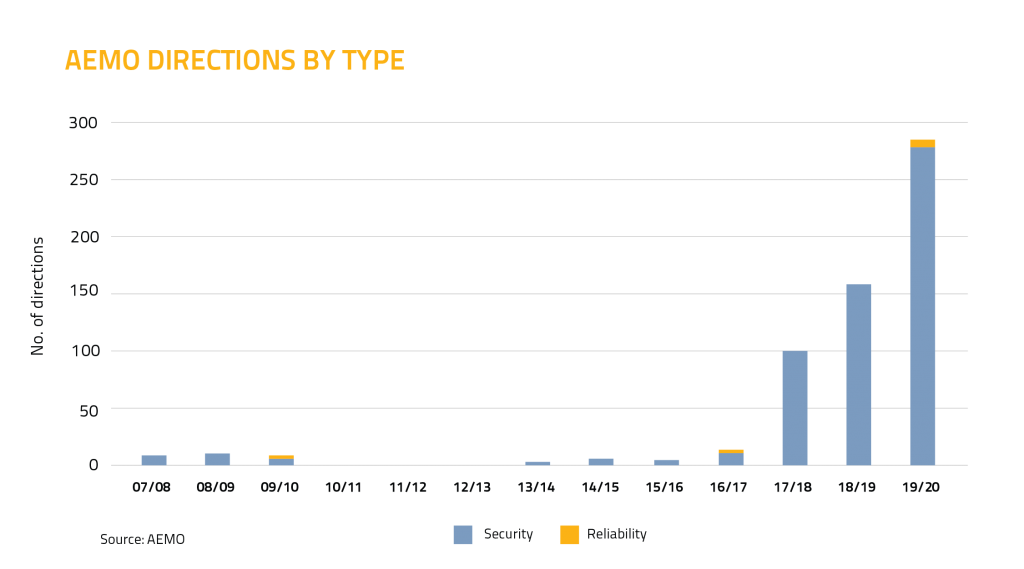 What’s next for the ESB?

On 5 January 2021 – the same day it released the latest Health of the National Electricity Market report – the ESB released details on its work so far on the post-2025 energy market design project.

Following consultation with industry and governments during 2020, the ESB identified four areas of reform to address the challenges facing Australia’s electricity supply:

The ESB will continue to work with advisory groups and other stakeholders to develop detailed post-2025 energy market designs, ahead of public consultation in March 2021. Governments are expected to be provided with options for the way forward by the middle of the year.

After that, it’s likely the ESB will be wound up, and – as per the recommendation of the independent review – the function of bringing the AEMC, AER and AEMO together to integrate the interlocking responsibilities for national energy security and oversee a coherent and collaborative approach to the development of the energy market will be given to a “reinvigorated market bodies forum (MBF)”.

“In a post-ESB world,” the independent review of the ESB states, “there is a requirement for senior energy officials to ‘step up’ and take a leading role in developing the transition arrangements to a MBF.”

Whether they’re overseen by the ESB, an MBF or another body, it’s clear that reforms to the energy market are on the way to ensure that emissions reductions can co-exist with system security and reliability – and that all of Australia’s energy generators will have a role to play in the transition.