How does the electricity market work? 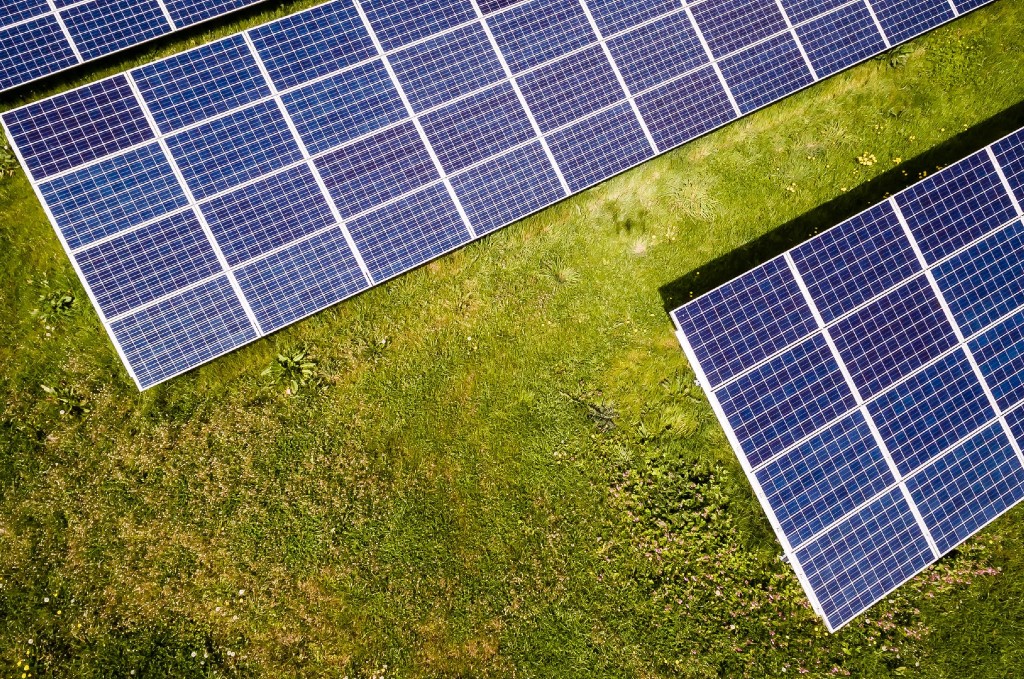 The National Electricity Market is transforming rapidly, as renewable energy sources and changes in daily energy demand patterns make their mark on the industry. Here’s what you need to know about the market that determines the price you pay for power.

The National Electricity Market (NEM) is a ‘spot market’, or ‘pool’, in which power supply and demand are matched in real-time through a centrally coordinated dispatch process that is managed by the Australian Energy Market Operator (AEMO). Generators sell electricity to the pool, and retailers buy electricity from the pool to on-sell to consumers.

The NEM operates on one of the world’s longest interconnected power systems, with 40,000 kilometres of transmission lines and cables connecting Queensland, New South Wales, the Australian Capital Territory, Victoria, South Australia and Tasmania. (Western Australia and the Northern Territory aren’t connected to the NEM, mainly because of the distance between networks.)

Energy is generated and used in each region, and also traded between regions – about 200 terawatt hours (TWh) of electricity is supplied to approximately 10 million customers through the NEM each year.

As you’d expect, electricity is big business – in the last financial year, $13.2 billion was traded in the NEM, between the 200 registered participants in the market.

How does the spot market work?

Generators offer to supply the market with a certain amount of electricity for a particular price, and AEMO accepts those offers, starting with the cheapest generator and working its way up to the more expensive generators until enough electricity has been secured to meet demand. Renewable energy is usually dispatched into the market first, because it’s available at the lowest prices.

This process occurs every five minutes – the highest offer that AEMO accepts from a generator is then set as the ‘dispatch price’ for that five-minute period. Every half hour, the last six dispatch prices are averaged to determine the ‘spot price’ for each region. (From September 2021, the spot price will be calculated every five minutes.) Every generator whose energy is dispatched during that period is paid that same ‘dispatch’ price for their electricity.

The National Electricity Rules set a maximum spot price, also known as a ‘price cap’, which is adjusted annually for inflation – from 1 July 2020, this cap has been set at $15,000 per megawatt hour (MWh). The rules also set a minimum spot price (also called a ‘floor price’), which is currently set at -$1,000 per MWh.

While there is a large difference in the maximum and minimum offers generators can submit to supply energy in the NEM, in 2019/20 the average spot market price of energy in each state was:

To manage the risks associated with the volatility in the spot market price, many large energy users and energy retailers instead purchase energy through the ‘contract market’ – where generators can enter directly into contracts with energy retailers and large industrial businesses to sell them electricity at a fixed price. These contracts insulate both generators and their customers from the volatility and five-minute price fluctuations in the spot market.

What causes the price of wholesale energy to fluctuate?

The NEM is a highly competitive market, and prices fluctuate in response to supply and demand at any given time. Because the NEM is currently oversupplied, spot market prices (on average) were lower in 2019/20 than they were in the previous financial year. 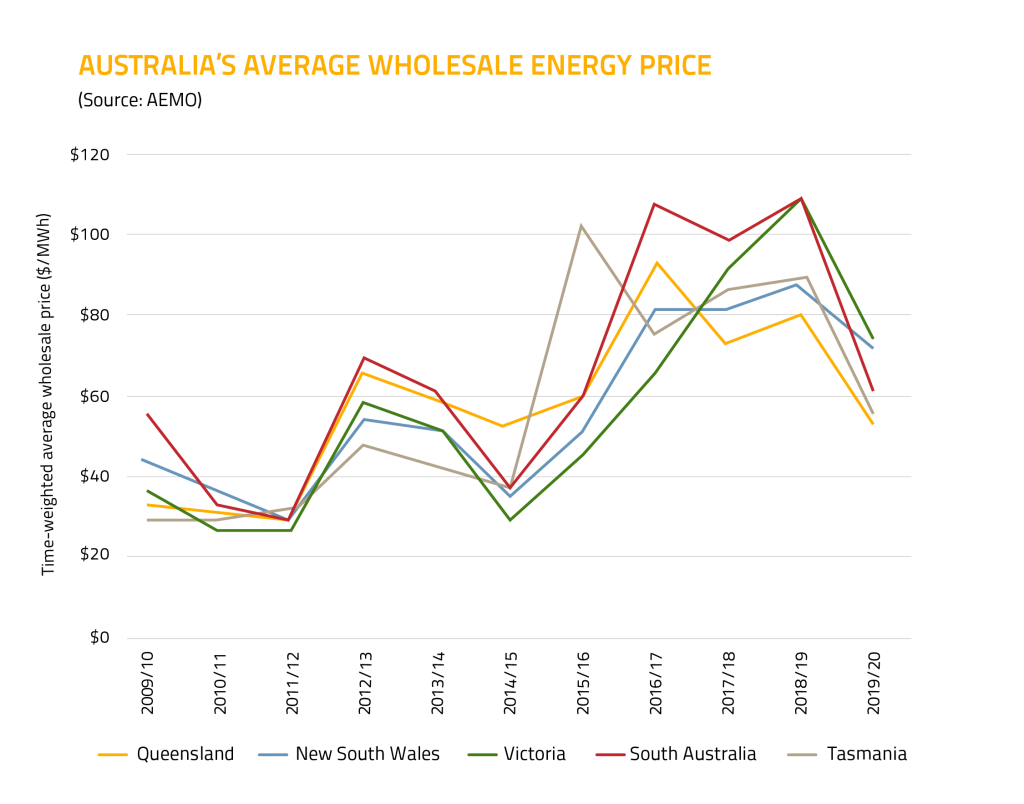 Wholesale energy prices peaked early in 2019, due to a combination of high fuel costs that raised the prices being offered by generators, and high demand driven by the weather.

Victorian, South Australian and Tasmanian prices were the most volatile at that time, largely due to an unplanned outage at Loy Yang A Power Station in Victoria that lasted for several months and wiped out 11 per cent of that region’s supply of low cost energy. Outages at Victoria’s Yallourn Power Station and Mortlake Power Station exacerbated the situation.

Prior to that, the closure of two brown coal power stations – South Australia’s Northern Power Station in May 2016 and Victoria’s Hazelwood Power Station in March 2017 – contributed to rising prices, especially in those regions. The Hazelwood closure, removed five per cent of the NEM’s total capacity – representing a large drop in supply to the market.

More recently, Australia’s extreme weather events in January 2020 led to short bursts of high prices in New South Wales, Victoria and South Australia that were masked by the averages. Bushfires tripped transmission lines and limited generation at times, but the average wholesale price still fell sharply, because of otherwise mild weather conditions that led to unusually low levels of summer demand; lower coal and gas fuel costs; and a rise in low-priced solar energy generation that has led to the market’s current oversupply.

And of course, just as it has affected virtually every other aspect of our lives in 2020, COVID-19 has had an impact on the energy market. The pandemic has led to a significant drop in global oil and gas prices, enabling gas-fired plants to bid into the market at lower prices and contributing to the oversupply that has driven the decrease in cost of wholesale energy.

What’s the outlook for the electricity market?

Electricity prices are expected to continue falling, largely due to continued investment in renewable generation. 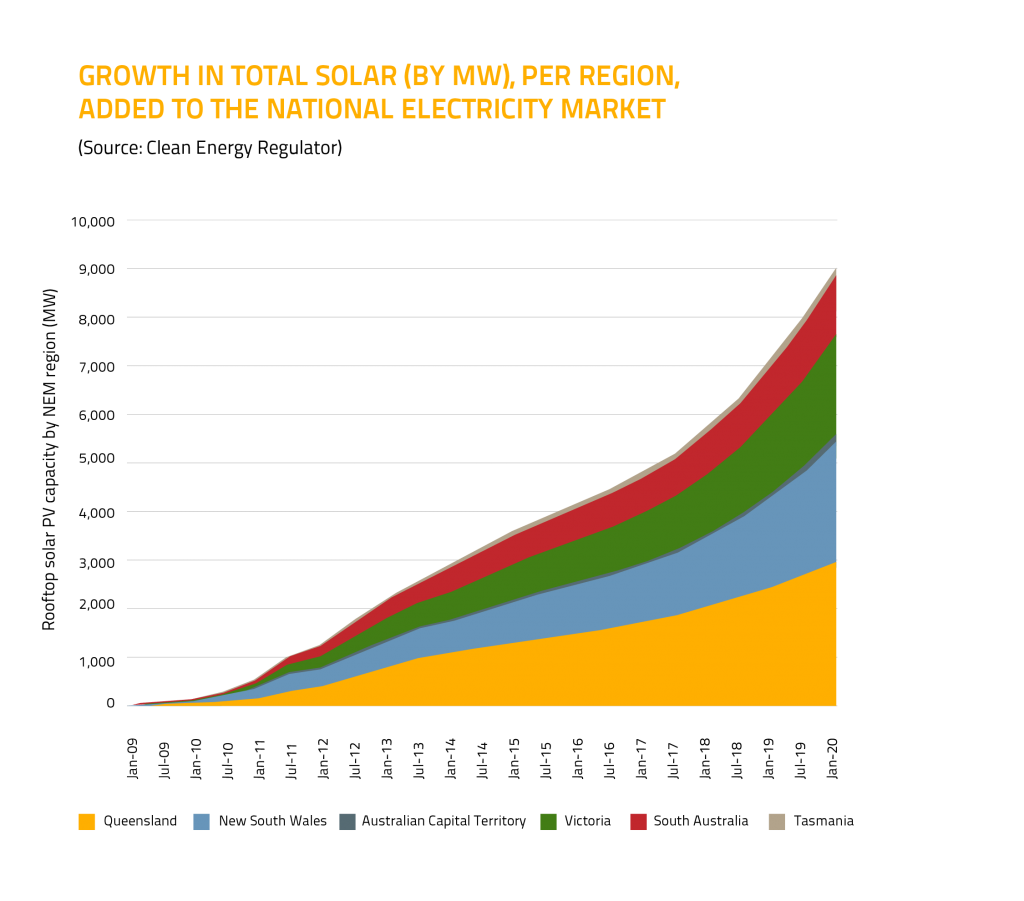 The falling costs of solar panels and batteries has led to an uptake in rooftop solar installations. This ‘behind the meter’ (i.e. off-market) energy source, generated by energy users themselves, reduces the demand on the NEM during the day, when rooftop solar PV generation peaks. It also contributes to oversupply, because surplus energy from rooftop solar is added to the NEM, and is usually dispatched ahead of energy from conventional generators because of its low cost. By 2030, the Clean Energy Regulator expects rooftop solar to account for 10 per cent of Australia’s demand for energy.

This oversupply is unlikely to be balanced by a growth in demand – while population growth should lead to a rise in household energy consumption (demand), this will be offset by the continued penetration of rooftop solar and the addition of large-scale renewable energy sources to the NEM (supply).

This oversupply is set to continue increasing. During the 2019/20 financial year, for example, 2,338 MW of large-scale wind and solar projects were accredited for connection to the NEM. During that same period, 18.8 per cent of the electricity that was consumed was generated by large-scale wind and solar photovoltaic (PV), a rise from 16 per cent in the previous financial year. The Clean Energy Regulator expects that figure to rise to 27 per cent by 2022, and 40 per cent by 2030.

Traditional fossil fuel generators continue to play a major role, producing 77 per cent of the electricity in the NEM in the last financial year, but there’s no denying the rapid transition that is taking place in the electricity market. According to the Australian Energy Regulator’s State of the Energy Market 2020 report, around 15 per cent of the NEM’s coal generation capacity in 2010 has since retired, and another 29 per cent is scheduled to retire by 2035.

The future challenge for the NEM will be to guarantee there’s still enough reliable energy to supply periods of peak demand, even if those periods last for just a few days – or hours – each year. There is also the challenge of maintaining a secure, reliable network in the face of decreasing synchronous generation, such as coal and gas, which provides network stability.

While renewable energy sources are driving costs down and benefiting the environment, the weather-dependent nature of wind and solar generation, and the tendency for these generators to be found on sunny or windy areas on the edges of the grid, where transmission network capacity is weak, could lead to supply gaps.

In the years ahead, ensuring that energy is affordable and reliable, while being sustainable, will continue to be the paramount concern for the NEM.