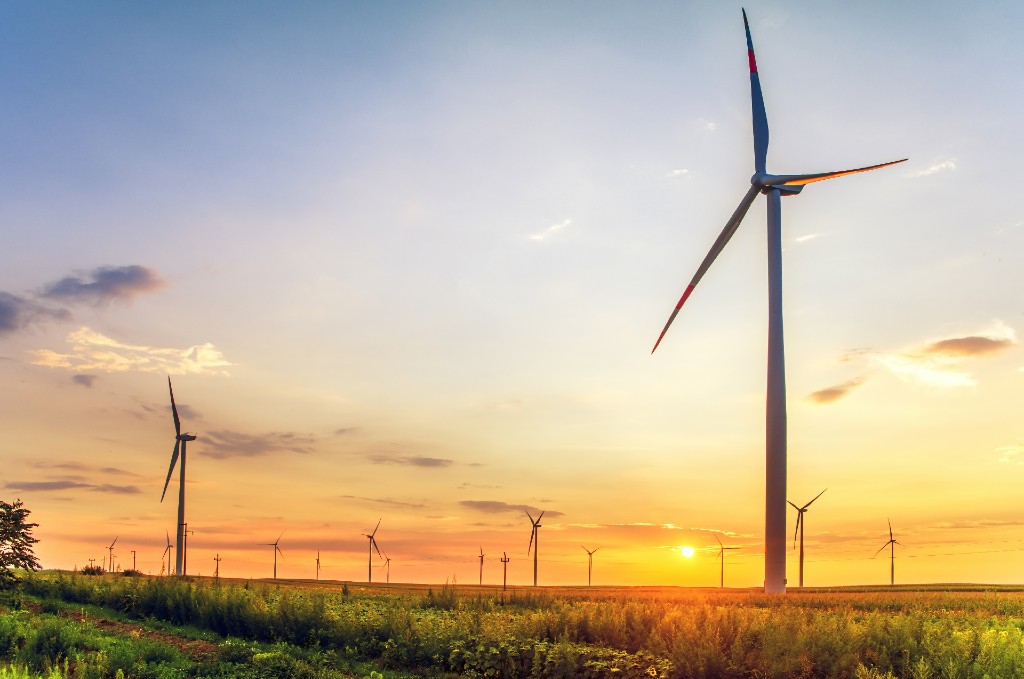 Wind power is on the rise in Australia, but it’s not simply a matter of waiting for a strong gale to charge your devices.

To put it into extremely simple terms, wind energy is electricity generated by the power of the wind. Of course, people have been coming up with ingenious ways of harnessing these winds throughout recorded history, from windmills to sailboats, but wind turbine technology has evolved over the past century.

How do wind turbines work?

At its core, wind power is actually just another form of solar energy – wind currents result from changes in air temperature and pressure that are triggered by the sun.

These wind currents are then converted into electricity using a wind turbine. The turbine is made up of four main parts – the base, tower, generator and rotor blades (also referred to as propellers). Most wind turbines have three of these rotor blades.

The wind spins the rotor blades, which creates the kinetic energy that drives the generator. The generator converts wind into electricity by rotating magnets around a stationary coil of wires known as the stator – as the magnets pass the stator, they produce alternating current (AC) electricity that can be exported to the power grid.

Wind turbines are most effective in areas with high average wind speeds. The winds need to be constant, or at least coincide with times of peak energy consumption during the day and early evening.

Turbines are usually grouped together in wind farms on hilltops or near the ocean – away from built-up areas and buildings that would interfere with the wind. They can also be placed off-shore, in oceans or large lakes, where they either float on the surface or sit atop pylons extending to the sea floor.

Turbines in wind farms tend to be very tall (between 130 and 160 meters high, on average), because winds are stronger higher from the ground and longer rotor blades are able to harvest more energy.

Depending on your location, it might be possible to install a small-scale wind turbine on your property, but this is more common in remote areas where connection to the electricity grid is inconsistent or non-existent.

How widespread is wind energy in Australia?

According to the Clean Energy Council, wind overtook hydropower as Australia’s leading source of clean energy in 2019, making up 8.5 per cent of all electricity generated in the country and 35.4 per cent of all renewable energy.

The adoption of wind energy in Australia is partly due to geography. With elevated areas in most states, and the strong westerly winds known as the Roaring Forties on the southern coastline, Australia is relatively well-suited to harness the power of these currents.

Eight wind farms were commissioned in 2019 alone, adding 837MW of generating capacity, making it the best year ever for the sector. It’s worth noting, however, that those eight wind farms still account for considerably less generating capacity than one coal-fired station – Stanwell Power Station, for instance, has capacity to generate 1460 megawatts.

At the outset of 2020, 30 more wind farms, with a combined capacity of 5.5GW, were under construction or committed financially; with incentives for investment provided by government subsidies under the Renewable Energy Target scheme.

Additionally, the cost of wind energy is expected to fall – the Australian Renewable Energy Agency (ARENA) reports that wind farms are delivering electricity at around $50-65/MWh in 2020, a figure they expect to drop below $50/MWh in 2030.

Are there drawbacks to wind energy?

Because wind turbines generate power without using fossil fuels, wind energy is clean, safe and renewable – but not entirely without drawbacks.

In 2018, Ryan Zinke – then the United States Secretary of the Interior – made headlines when he observed that “every type of energy has consequences” and claimed the “carbon footprint on wind is significant”, later clarifying that he was referring to the “manufacturing of materials and component parts, and the transportation and construction of the facilities”. However, a National Renewable Energy Laboratory review of life cycle greenhouse gas emissions found that the typical wind plant produces just 11 grams of carbon dioxide per kilowatt-hour of electricity generated over the life cycle of a typical turbine, as opposed to 980 grams for coal and 465 grams for natural gas.

Wind energy also shares many of the same challenges as solar energy. Without a costly accompanying battery, it cannot be stored, meaning supply is largely weather-dependent. On the other hand, coal can be stockpiled on-site, so while traditional coal-fired generators don’t offer the same environmental benefits as wind and solar generators, they are still required to provide the National Electricity Market with continuous ‘baseload’ energy.

Inertia acts as a shock absorber, giving the grid more ability to withstand surges in supply and demand and recover from system failures. A lack of inertia exposes the grid to instability. In its recent Renewable Integration Study, the Australian Energy Market Operator (AEMO) warns that while inertia levels in the NEM on the mainland have never gone below 68,000 megawatt seconds (MWs), they could fall all the way to 45,000 MWs by 2025 as a result of the transition towards non-synchronous energy generation.

Finally, much of the large-scale wind generation entering the market is in windy areas at the edges of the electricity grid. These are often areas with relatively weak transmission network capacity, putting the grid at risk of congestion when too many electrons converge on the same path. The AEMO’s 2020 Integrated System Plan identifies up to $14 billion of transmission investments needed to adapt to the rise in renewables, including upgrades to transmission lines from rural renewable energy zones.

Regardless, wind energy will continue to be an increasingly important component of Australia’s electricity mix – and with all those new wind farms on their way, it’s not hard to tell which way the wind is blowing.